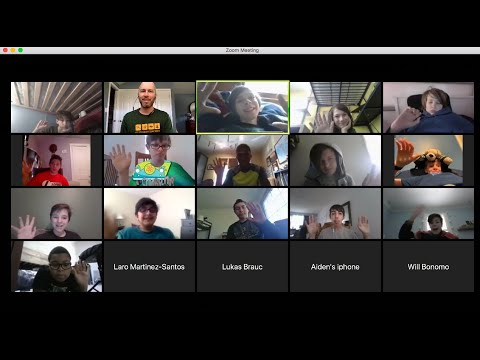 Stuck in a situation out of their control during COVID-19 – quarantined and forced into remote learning -- the Percy Julian Middle School Men's Ensemble decided to approach the situation with humor and song. One choir member, 7th grader Tavi Calin-Jagemann, rewrote the lyrics to "For the Longest Time" with input from other members, while Choral Director Andrew Seymour pulled off creating a video that looks effortless.

"As musicians around the world began navigating potential options for performing remotely, the most popular solution has been to create virtual ensembles" Seymour said. "In reality, they were edited to look that way since it's impossible to perform together due to the 1 to 2 second delay over the internet."

Julian's Men's Ensemble is a co-curricular group with students in grades 6 through 8. It is an extension of the school's music program; members are in band, orchestra or chorus classes at Julian. This group was meeting once per week during the regular school year, paused when District 97 schools closed in mid-March and resumed when "after the first couple weeks of Remote Learning, district administrators gave us the go-ahead to reach out to before/after school groups."

It was Seymour who suggested a parody, saying this ensemble is known for its "schtick" during its performances. "We had a reputation to uphold…" he said and challenged Tavi to write the lyrics during the remote learning.

"Later in the same Zoom call he dropped the first two lines in the chat -- Once I thought I'd see my friends again, now I know this nightmare never ends -- and another singer said 'Whoa. That's actually really good,'" Seymour said. "A few days later, Tavi wrote a rough draft of the lyrics and on another Zoom call, other members of the group made comments on a Google Doc and added to the verses."

Seymour then prepared practice tracks for the singers to record.

"Students recorded their parts on a phone or mobile device while listening to the practice tracks on another device through headphones," the choral director said. "Since we only learned half the song in person they also had to practice the new sections before recording. It's an awkward process and the singers really had to take a leap of faith that their voices would not stick out or sound bad in the recording."

Seymour said the inability to hear each other also created a challenge. "When you are singing live in a choir you constantly adjust to the voices around you and match their tone, pitch and volume," he said.

Through the "magic" of editing and Seymour's musical skills, he was able to "account for their inability to hear each other without the use of auto-tune. The finished product appears as if the students are singing in unison, each from his own home.

"The music teachers around the world, spending hours in front of a screen with audio and video editing software, can't wait to be with our students in person again," Seymour said.

Awesome job, writers & singers! Very clever lyrics and hilarious images. And a huge round of applause to Mr Seymour for putting together a fabulous video. I know that must have been harder than you made it look.

Bravo! So much talent. Thank you for sharing. Someone please contact Jimmy Fallon.

Notice is hereby given by the President and the Board of Trustees for the Village of Stickney of a hearing to be held at 6:30 p.m. on July 21, 2020, concerning the Village's intent to adopt an ordinance providing for the appropriations for the...

A historian once remarked that the Civil War was...

Readers can view the petition which has received over...

Given this country's dismal record of handling the...

On: OPRF likely to have another year of...

Really, Bruce. Go research the language used in the...

Really Bill? Because Brian IMO happens to be mostly...

All confederate statues need to go from all public...

Putting 16 units in that spot zoned for two does two...

I am sorry, it was Ira Hayes. It is very difficult to...