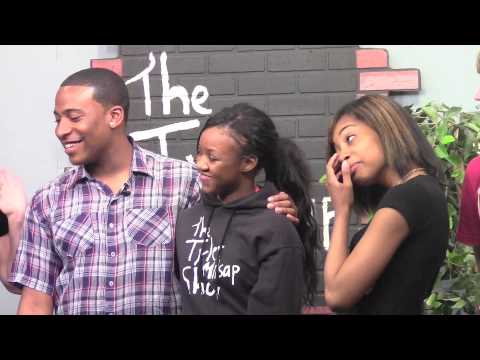 Milsap gets a hug from his producer, Ana Goelzer, as he and crew say goodbye on camera.

Milsap has an ease with guests because of his love for talking and curiosity about what makes people tick.

Tyler Milsap on the set of his show at Oak Park and River Forest High School. As a sophomore, he walked into the studio and asked to do a talk show. A successful two-year run comes to an end with graduation.

Tyler Milsap on the set of his show at Oak Park and River Forest High School. As a sophomore, he walked into the studio and asked to do a talk show. A successful two-year run comes to an end with graduation.

Milsap, in the monitor, will attend Howard University to study broadcast journalism.

The Tyler Milsap Show as seen from the control booth at Oak Park and River Forest High School.

Milsap prepares for the taping of his final show, on which he read a letter thanking viewers and all who made his show possible.

Milsap asked the crew, present and past, to join him on set for a farewell on camera.

With sparkling apple juice, Milsap and crew toast to the show's two-year run.

Founding producer Emi Dammers, right, returned to OPRF for the taping of Milsap's last show on May 22.
< >
< >

There are two main ingredients in the creation of the Tyler Milsap Show:

Second, he admits to being nosey.

"He's a very attentive host," said Milsap's producer, Ana Goelzer. "He seems to get involved in his guests."

The Oak Park and River Forest High School senior taped his final show on May 22, ending a two-year run that covered a wide range of topics, from cooking segments to an interview with the parents of shooting victim Hadiya Pendleton.

When he was a sophomore, Milsap walked into the student-run studio and asked to do a talk show.

Over the course of more than 20 shows, viewers tuning into Comcast Channel 6 or AT&T Channel 99 could find Milsap comfortably chatting with OPRF students about violence, their love lives or, as in one recent episode, chronic illness. During a Christmas show, Milsap and his crew organized a toy and coat drive that benefited 60 needy children.

Only graduation kicks him out of his hosting seat. What Milsap started will continue with a new host and show next school year.

"I'm sad because I've done this for half my high school career," said Milsap, who will study broadcast journalism at Howard University. "But this is not necessarily the end."

We are seeking a Director and 2 teachers.  Director must be qualified and have Associate's degree or equivalent.  Teachers must be director or teacher qualified.  Mon thru Fri. working with Infants to 6 yrs...

A historian once remarked that the Civil War was...

Readers can view the petition which has received over...

Given this country's dismal record of handling the...

On: OPRF likely to have another year of...

Really, Bruce. Go research the language used in the...

Really Bill? Because Brian IMO happens to be mostly...

All confederate statues need to go from all public...

Putting 16 units in that spot zoned for two does two...

I am sorry, it was Ira Hayes. It is very difficult to...