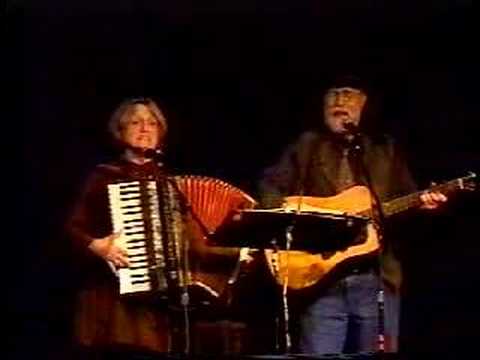 The most challenging blog so far. How to tell y'all about the singing/writing duo of Lou & Peter Berryman if you've never heard or seen them. First, I am admittedly a groupie. However, I do understand that some of you might not be addicted to wordplay. If you've never heard or don't appeciate the humor of folks like Tom Lehrer, Flanders & Swann, P.D.Q Bach, then maybe Lou & Peter are not for you. But, if like me, you thrill at insight thru humor, outrageous puns, twisted wordsmithery, then I'll give a description a try. Lou (for Louise) plays an accordion on a stick and sings in a somewhat warbly voice and mostly writes the music to their songs; Peter, noticeably more burly, plays guitar and mostly writes the lyrics. And what lyrics they are - lyrics that touch on the human condition from a decidedly midwestern (they're from Madison, WI) perspective, but as filtered by way of the moon.

Lou & Peter's personal story is as intriguing as their songs.  They were married to each other for a short time, once long ago - then they got a divorce and continued to write songs and tour together for the next 30 years or so, married other people and kept writing and touring.

Now they have so many songs that they need a thick book on stage with them to remember all the twists & turns.

I give up - I really don't know if I've even come close to giving you a picture of this most unusual musical duo - so you'll have to come see and hear for yourselves. Besides, it's free - yup, FREE - at the Oak Park Library, Thursday, October 14 at 7 pm.

OK -- one more try - here's a tidbit from one of their many songs.

Tell the truth and I'll be brave

If I were in a spacesuit, an hour from the shuttle,

It'd be OK from there

If I were with the Packers in Cleveland in a huddle,

It'd be OK from there

If I had influenza, without my decongestant,

And we were in a cyclone dear

& I could keep a clothespin affixed to my proboscis,

Does that help at all?  See y'all Thursday!

Steve - you said it better than I ever could. Thank...

Jr. People can send the money to Live Cafe. They were...

This information is from Patch for Oak Park and River...

Just don't send the money to the Suburban Unity...

Jr. If he is crying he can stop it because all of his...

Jeffrey Smith you can be the one to make the change....

I believed from the beginning that Anan had a flawed...

"We already know that vaccination won't...

The WJ is simply wrong here regarding Abu-Taleb's...

So, now, due process by elected officials is...